This is the new faction rules that was implemented officially on January 16, 2021.

Faction members must render 30 days(depending which faction) prior when they decide to resign to avoid getting blacklisted from their current faction. They must also ask approval from both current and next slot holders in order for them to request a "lateral transfer".

Faction leaders can notify their fellow leaders if one of their employee(s) went AWOL, and the player(s) can be punished with blacklist to all factions, depending how grave the situation(IC or OOC) he/she is in.

These rules are still subjected to changes and will be updated at any time the Faction Moderators/Director of Game Affairs deemed so.
_________________ 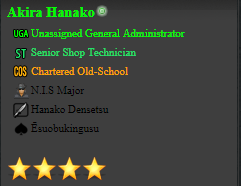 Retired everything. Hit me up if you wish to roleplay!

Similar topics
» *Official Server Rules/Offenses
» REPORTING GEORGE NOAH FOR BREAKING THE RULES AND ABUSING HIS FACTION
» LSFMD Information || Rules & Requirment
»  If you wanted to be a Faction leader please kindly send your application form, to faction you wanted to be in.
» Application for Faction Leader